The only metric which really matters is Performance Improvement

From the many responses to my last article, I believe that I may have left my valued audience a little confused.

Firstly, I hadn’t realised that I had so many avid followers who would not only read my articles but also point out the apparent inconsistencies contained within.

It is impossible to write an article that is of value to all or, in some cases, of value to many, as everyone has their own agenda and experiences, which either concur with my own views, enhance them or put forward better, perhaps more eloquent suggestions. I am happy with any feedback, ‘the good, the bad and the ugly, as the key point of these articles is to create a valuable forum on key issues that is helpful to all those who can benefit from them.

From the responses, I deduce that the key concern from this previous article was that I quoted an Edwards Deming Comment…..’In God We Trust, All Others Bring Data’ and then went on, in narrative, to criticise the inadequacy of Data.

Though unforgiveable on my part to create such confusion, greatly encouraging that so many asked for further clarification, so I will attempt to set the record straight, a record which is becoming more distorted with time and the fact that several respected luminaries are now criticising tools which we have to some extent relied upon to help us turn data into actionable information, such as OEE, Six Sigma, and so on. Apparently Mikel Harry, the inventor of Six Sigma, himself admitted it was a fake.

Motorola, who deployed six sigma significantly, apparently only ever achieved five sigma. But is Six Sigma even necessary or desirable in all cases? In the manufacture of widgets to predetermined tolerances, six sigma and even better would probably be desirable in that certain tolerances would be reduced to be as tight as possible to meet the customer’s requirement. Many applications, however, do not need nor benefit from such tight tolerances. As experts will know, every time a process is improved to another sigma level, (say from four to five) the process variability drops, or at least, that’s the theory. But every time this happens, improving processes and reducing variation, the cost goes up and, in an increasingly competitive world this, is deeply undesirable.

So, it is highly desirable to improve process performance only to a level necessary to consistently meet the customer needs and expectations.

Control of pre-packaged goods, for example, need only have variation reduced to satisfy three or, at best, four sigma. The flexibility within Average Quantity Law permits a significant degree of variation. Any packer attempting to improve performance of packed products to five or six sigma would simply be wasting money, whilst achieving no benefit.

So, it doesn’t really matter whether we call six sigma a fake or an over-simplification, is it useful? Put in context, I believe it is, but the context should be ‘a means of reducing variation in order to ensure that your goods consistently satisfy customer requirements. Therefore, once supplied, all that comes back is the customer asking for more.’

Attempting to apply six sigma literally and universally across any manufacturing process is simply unnecessary and costly.

At the start of this article I talked about data and information leading to six sigma. Though, all data, to be useful, must be turned into actionable information, something that can be seen, then instantly acted upon to bring about performance improvements. This was my whole point in trying to highlight the importance of instantly actionable information. Pure data just tells you how good or bad something is, but it doesn’t tell you what to do to improve performance. 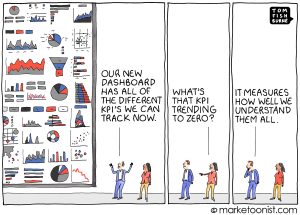 OEE is Simply a Measure of Performance Improvement

Coming now to OEE, another of our famous metrics. OEE has grown massively in popularity, especially across the western world, but we are now beginning to see some of its weaknesses.

OEE is a key metric within many of our systems but we never realised that it would be manipulated in the way it has in so many companies. As most know, OEE is the simple calculation of three important manufacturing metrics, Availability X Performance X Quality. In its originally intended ‘pure’ form, it was theoretically a useful comparative metric with a World Class of 80% OEE.

As there are 168 hours in every week there are, in theory, 168 working hours in every week (through shift patters, of course). From this, companies started to create their own exceptions, limiting their availability by removing shift patters (shortage of orders), maintenance, tea breaks, meal breaks, product changeovers, meetings, etc and some have even told us ‘I want to do OEE but am not interested in ‘Quality’’.

All Manufacturers set their own OEE Parameters

Again, none of this matters. It is, after all is said and done, the manufacturer’s business for them to decide what to include and what to leave out. All we suggest is that companies apply the same rules consistently and then simply use OEE as a performance improvement metric, along with others like ‘Units per Man Hour Produced’ and Materials Utilisation, Six Sigma, etc, etc.  Keeping the inputs constant obviously means that they can still be very useful comparative measures by which the manufacturing teams can challenge themselves and each other to implement sustainable improvements.

Dr Donald J. Wheeler, one of the Giants of Quality Performance Improvement and a colleague of Dr Edwards Deming, had a somewhat jaundiced view of OEE. To end this month’s post on an amusing note it would only be fair to share his comment with you. 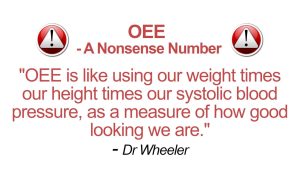