As consumers, we have become very accustomed to price increases. We have been informed that the inflation rate for December 2021 was 5.4%, the highest reading since 1992, but we know that the reality is far worse. A couple of examples quoted directly from Jack Monroe (BootstrapCook) dated Jan 19th 2022:

As Monroe says, ‘such price increases (for basic foods) hit the poorest and most vulnerable households the hardest’.

Such comparisons make a total nonsense of the officially quoted figures such as ‘an inflation rise of 5.4%’. Everywhere we look, prices are increasing rapidly and significantly, but wages are not keeping pace. In fact, if the working population ask for wage increases sufficient to cope with even the low officially quoted inflation figures, prices will need to rise still further to cope.

Irritating the UK working population, Company Bosses and Unions still further, the Governor of the Bank of England, Andrew Bailey, (drawing a salary in excess of half a £million pounds per year), lectures us on the importance of ‘wage restraint’

‘Why is it that every time there is a crisis, rich men/women ask ordinary people to pay for it?’

The comment about wage restraint comes as the Bank of England raises the base rate, for the second time in three months, to 0.5%. The excuse, as always, is to try to control inflation amongst fears that the energy crisis will push this above 7%. Andrew Bailey, and his cohorts, don’t seem to realise that raising interest rates twice in 3 months will itself fuel inflation still further, as it will increase operating costs for any company dependent upon an overdraft or bank loans, plus homeowners with mortgages, if the building societies decide to pass these increases on. 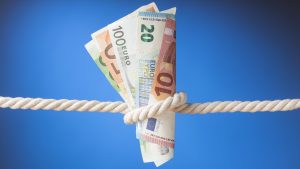 Incidentally, Andrew Bailey’s salary is 8 times that of the median salary for a Bank of England (BOE) employee and 18 times the UK average for a full-time employee, those same people that Andrew Bailey expects to exercise pay restraint. This just goes to show how out of touch with reality Andrew Bailey really is. The sick joke behind the BOE decision to raise the base rate is that The Governor allegedly claims this was necessary to curb inflation and encourage people to save more. Really! In those infamous words from John McEnroe, ‘You Cannot Be Serious!!!’ Your actions have just stoked the fire under inflation and with so many struggling to make ends meet you ask us to save more! That might well be possible on a ‘fat cat’ salary, but certainly not on most people’s.

The price of fuel for our cars and commercial vehicles is at an all-time high and yet, only yesterday, Shell and BP announced record profits for last year of £14 billion and £9.5 Billion respectively.

As ordinary working people, on ordinary salaries, we can still do our bit to buy better and to waste less, but as we are already stretched to meet existing commitments without falling into debt, there is an obvious limit to what we can do, especially if inflation continues to bite into our available cash and pay restraint is exercised to the extent that it doesn’t keep pace with inflation.

The good news is that there is a lot that can and is being done, within the food and drink industry (the UK’s biggest employer) to reduce wastage and increase productivity.

According to the charity WRAP and IGD’s Annual Progress Report, the UK food and drink industry save more than 250,000 tonnes of food worth £365 million from going to waste a year. Launched in 2018, the roadmap outlines the route the UK food industry should follow to achieve the UN Sustainable Development Goal to halve food waste by 2030. More than 200 of the UKs large food businesses achieved an impressive reduction of 17% in food waste.

Roadmap businesses generated 90% of the increase in UK food redistribution, saving 26,000 tonnes more food in 2020 with a value in excess of £50m, enough to provide 60m meals.

These are indeed great achievements, but far more has to be done if even more significant price increases are to be avoided.

Many UK food and drink companies exist on tiny net profit margins. When we look at UK food company audited accounts (all freely available at Companies House), we find that it isn’t unusual to see nett profit margins, before tax, as little as 1% of turnover. Yet these same firms are hit year on year with statutory minimum wage and pension increases, increases in raw materials and packaging, increased energy costs, and, due to the current inflation, can now expect inflation linked demands for salary increases. As if this was not bad enough, when these manufacturers ask their customers (the supermarkets) to accept a price increase, the response is usually a ‘no’ or a ‘perhaps, if you can show us what you have done to reduce wastage and improve efficiencies since the last round of price negotiations’.

So, quite apart from the UN Sustainable Development Goal to halve food wastage by 2030, manufacturers are under constant pressure to reduce waste, improve efficiencies and become more Green.

The Power of 1% ‘Cost of Sales’ Reduction

Back to company accounts. A typical medium sized food manufacturer will probably turn over about £100m per annum. On that turnover, the Cost of Sales will often be around £80m. Cost of Sales should only strictly include the raw materials and the direct conversion labour to turn the raw materials into finished products.This leaves £20m for overheads, office costs and profit.  Not infrequently, this will be reduced to 1% (1m) or less.

In our factory walkthroughs, we always attempt to encourage performance improvement focus upon Cost of Sales, as this is the greatest area of cost and usually the greatest area where wastage and mistakes occur. 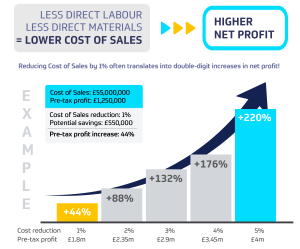 David Moon, Collaboration Director of WRAP says, “Given current commercial pressures on food businesses, the reduction of waste should be on the agenda of every CEO and Finance Director. Government has said that they will consult on making the reporting of food waste mandatory; I would encourage businesses to get ahead of policy and reap the rewards of adopting good practise.”

So where does all this waste come from? It is everywhere throughout food manufacturing operations, from goods into despatch. Some obvious examples include FIFO (first in first out), which is often not managed as well as it should be. Consequently, earlier deliveries can get pushed towards the back of the warehouse and go out of date rendering them unusable. Next, there is often a mixing stage, where the wrong ingredients or wrong quantity of ingredients can be added, causing total batch wastage. On to the portioning stage, where spillage and overfill can also play a costly part. In the packaging stage, where the range of products has generally increased from a limited number of raw ingredients, the management of variables becomes much more complex.

These material areas are just a few examples where risk and wastage are vitally important in a) protecting the consumer and b) reducing operating costs.

The second area which we also look at in detail is production efficiencies, especially the OEE of production lines where the target line speed suggests a certain batch finish time, but the reality is frequently very different, in that the batch completion is significantly delayed by breakdowns, short stops and slow running.

Breakdowns and their root causes are often quite easy to find, but short stops and slow running can be much more difficult. This is where our specialist knowledge and experience can also be helpful.

So, for an integrated, solution-based approach, contact Harford. Our 55 years continuous service to the industry speaks volumes.  (01225) 764471