How Successful is Your Performance Improvement Project?

It is so encouraging to see many manufacturers embarking upon performance improvement programmes, but how successful are they?

I saw a LinkedIn post last week which criticised an assertion that 70% of re-engineering projects fail. The earliest reference to a similar quote seems to date back to Professor Michael Hammer in 1993 and has been re-iterated and misquoted frequently since. I have used something similar myself in previous articles.

This LinkedIn critic felt that the assertion was totally ridiculous.

However, it promotes thought as to what constitutes a successful re-engineering project and how broadly should the concept of ‘re-engineering’ be taken?

Firstly, how should we define Re-engineering? The Dictionary definition puts it like this (abbreviated) …’to achieve a dramatic improvement in business performance. …it is the examination and change of five components of the business: strategy, process, technology, organisation and culture’. 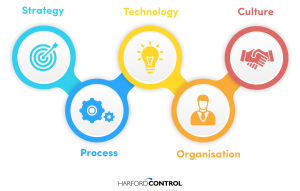 It seems reasonable, therefore, to talk of performance improvement and re-engineering as having similar roots in a manufacturing context, although different in degree. But what about a common definition of ‘success’? Is that ‘to improve to an agreed standard, by an agreed date, within an agreed budget’?

Being brutally honest, unless the project objectives have been fully achieved, whatever you choose to call it, it wouldn’t be strictly truthful to say that it is, or has been, a success. However, does that make it a failure? Not necessarily! In my experience, most improvement projects can be described as successful if they improve performance and show a healthy return on investment. If, on the other hand, the improvement was so small that its cost was greater than the benefit it provided, then I think it would be fair to say that it had been a failure.

Most improvement projects though do show a valuable return on investment, even when all the criteria haven’t been met. The project manager may not receive the accolade that he was hoping for if he overran the budget, overran the time scale and/or failed to achieve the total objective, but a cost-effective improvement is still just that and should be celebrated.

When I was taking my Lean Six Sigma training, I recall the tutor saying that any Continuous Improvement Manager should achieve, year on year, at least 5 times his annual salary to justify his continued company position but, Why? And Who said so? I remember thinking at the time, this is far too simplistic and the sort of ad hoc statistic that gets Lean Six Sigma a bad name. The tutor couldn’t qualify it either or provide any recognisable reference. The more I thought about it, the more ridiculous it seemed.

Suppose, for example, that a company is just starting their ‘Lean’ journey. The consultants have been, (shown some dramatic improvements, though not necessarily sustained) and left the company to maintain those improvements. Any company, having gone through such an exercise, will know that (notwithstanding Cultural Change or any other esoteric aspects of change) at the start of a Lean journey, it’s easier. All that so called ‘low hanging fruit’, but the more improvements you make the harder it gets. We once helped a company improve their OEE from a depressing 22% to 60%. Moving from 60 to 65% was far harder and 65% to 70% was, of course, harder still. To expect the CI manager to show annual improvements of 5 times his salary, irrespective, was plain daft. 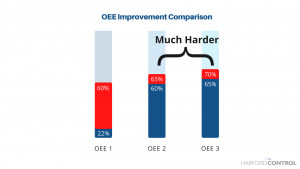 It seems that Success and Failure for re-engineering and performance improvement projects need far more ‘in depth’ analysis and better evaluations:

In my view, although the project failed to achieve several of its objectives, it still succeeded in delivering cost effective benefits.

Sometimes the criteria set for projects are just unrealistic from the outset, i.e. the expectations were unreasonable, the time scales were too tight and/or the budget too small. In which case, against such impossible criteria, the project was bound to fail from the outset. This is why I maintain that absolute key to the evaluation of any improvement project has to be ‘a healthy return on investment’. This may seem obvious, but some improvement projects are simply not worth doing as they will never show that all important ROI.

For example, some companies have said to me ‘we must improve our OEE from the current 80% to 85%’. My response is always the same. ‘Why?’, ‘What will it enable you to do that you can’t do now?’ ‘Will you be able to sell the extra that you make?’ ‘If you can’t, will you be able to reduce working hours?’ If the answer to these last two questions is ‘No’, then I would have to ask ‘So where will you achieve a Return on your Investment?

The foregoing naturally assumes that manufacturing risks, compliance and quality consistency have all been suitably addressed and that the key criteria is to improve efficiency and reduce manufacturing costs, without compromising quality.

It is quite possible, therefore, to fail many times and still be successful and, conversely to succeed many times but still end in failure.

Absolute key to performance improvement, I believe, is to never stop trying. Worst of all is to give up and we frequently wonder how many companies would still be in existence today if they hadn’t been so ready to accept a setback as total failure.