Is Your Continuous Improvement Journey Coping With Change?

Post-Covid, Post-Brexit, the Need for Change has never been Greater

Even before Brexit or the ravages of the Covid lockdowns, the Food and Drink Industry was under pressure and frequently operating on small profit margins within a fiercely competitive market.

Years of enforced increases in Minimum Wage and Pension Contributions, together with increased raw material and energy costs has seriously impacted profit margins. The reluctance to pass these increases onto supermarket customers, or their refusal to accept increases, has compounded the problems. To minimise the risk of losing a major retail client, many manufacturers have absorbed the increases, or been slow to respond, putting the sustainability of their business operations at risk. Brexit has also made recruitment and retention of production labour far more challenging for many.

So, if the input and transformation cost increases are inevitable and these, for whatever reason, cannot be passed on, what can be done?

I bought some biscuits today, made by Cartwright and Butler, or so I thought, as I like to buy British wherever I can. When I got home, reading the small print, I found they were made for Cartwright and Butler by a Lithuanian company. Out of interest, I googled ‘the minimum wage in Lithuania’ and was shocked to see that it is still less than £3.50 per hour. As the UK minimum wage has just increased again to £8.91 per hour, this makes a mockery of the EU’s ‘level playing field’.

Cartwright & Butler are by no means alone. So many UK companies have taken similar opportunities to set up manufacturing units in other European countries, due to lower labour rates and accessibility to willing labour pools, whilst still appearing to remain ‘local’. 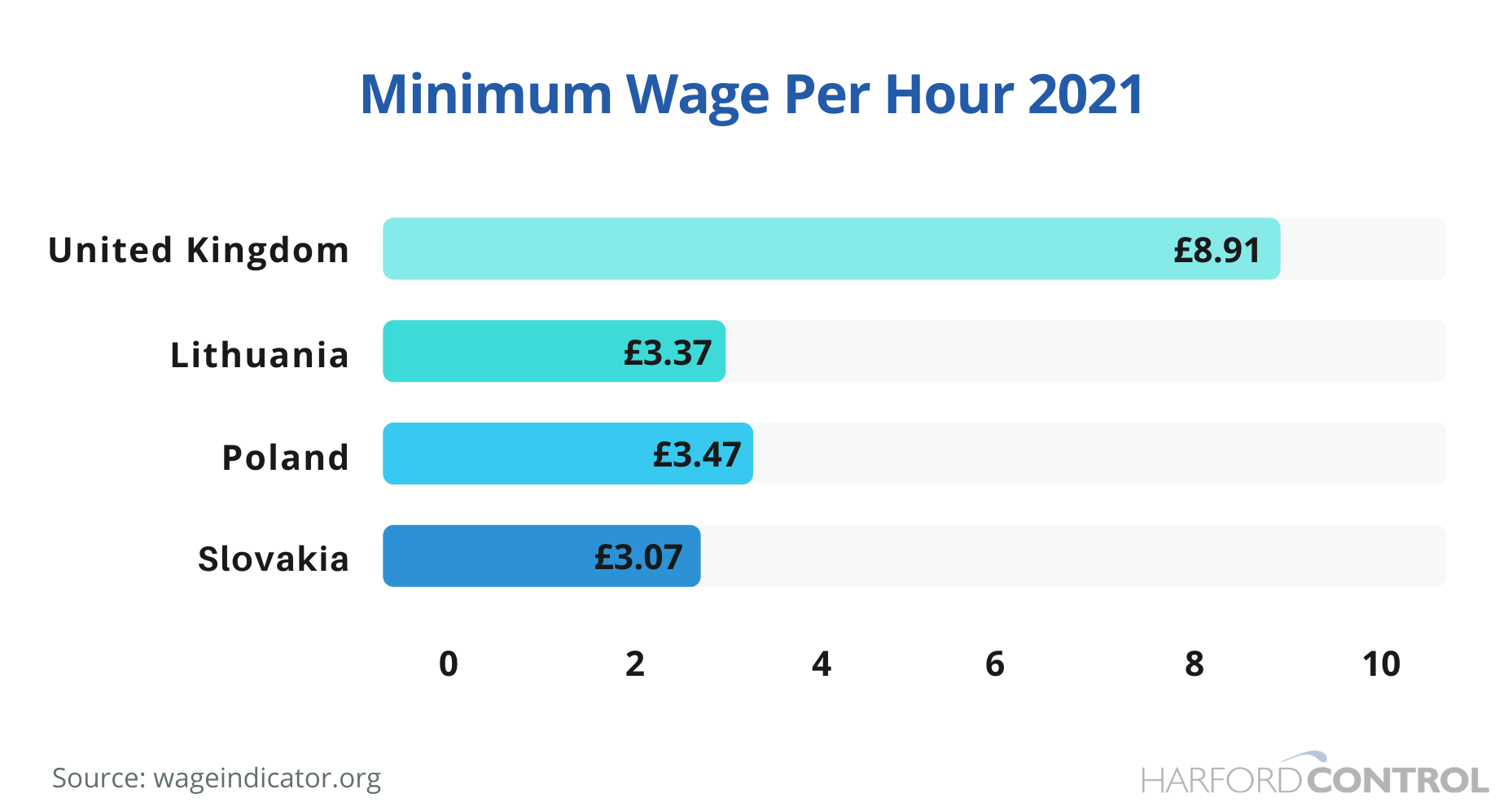 Companies such as Jaguar Landrover who created a new, state of the art, factory in Slovakia, towards the end of 2018 and employed 3,500 people, having previously made 4,000 redundant in Solihull. The minimum wage in Slovakia is still less than £3 per hour.

Many years previously, Twinings Tea transferred a large proportion of its UK tea packing operation to Poland, when the Polish minimum wage was less than £2 per hour.

Where is the EU’s ‘Level Playing Field’?

These are just a few examples and despite the so-called ‘level playing field’, this trend will doubtless continue. Unchanged, our UK manufacturing industry will continue to decline until some sectors disappear altogether, and we become even more dependent upon imported goods, not to mention the devastating impact that this could have upon UK jobs and incomes.

It is now more important than ever that manufacturers reduce wastage and improve efficiencies at every opportunity, but this is far easier said than done. Remaining the same, though easy, is no longer a viable option. Continuous Improvement must become the ‘New Normal’.

Market leaders are constantly looking for ways to improve efficiency, eliminate waste (fat) and reduce risk, to sustain and improve, their manufacturing operations. They already recognise the risks posed by low price competition, (even from within the EU).

Accounts at Companies House can be quite enlightening. We have been alarmed to see the insidious erosion of so many companies’ net profits, even when their turnovers have shown year on year increases.

As an example, in 2016, Adelie Foods’ balance sheet showed a net asset in excess of £30 million. Just two years later, the 2018 accounts showed those assets had been reduced to an £11 million deficit, even though sales turnover had increased. So, more than £41 million was wiped off the balance sheet during just two years of trading.

It’s Covid what did it!

Looking back over just six years before Adelie’s demise in 2020, they were once a successful company. The official version on Google is that Covid 19 caused them to go into administration in June 2020. The first case of Covid 19 registered in the UK was in January 2020, so that would tie in quite neatly. However, as their latest set of accounts showed such a negative balance sheet, it is quite obvious that their problems began long before Covid became a reality.

So what did go wrong? Of course, we cannot be sure and may never know. I should immediately qualify this, by saying that I not betraying, and would not betray, any confidence and that everything reported in this article is already in the public domain.

As many will realise, net profits in the food and drink sector are small, often as low as 1-3%. Their biggest costs are raw materials and direct labour to transform those raw materials into finished products. These costs combined, would fall under the heading ‘Cost of Sales’ on the Profit and Loss account which, when subtracted from the turnover, would show the gross profit. It is not uncommon to see the cost of sales as high as 90% of turnover, so to reduce internal wastage, the Cost of Sales is the most rewarding target for cost reduction.

Tracking Adelie over the previous 6 years, up to the last accounts filed in 2018, just a 5% reduction per year in Cost of Sales would have had a huge cumulative impact upon the balance sheet, such that Adelie Foods, when Covid hit, could well have had a net value in excess of £50 million which, with the help of furloughing and other government assistance, could have remained viable and saved more than 2,000 jobs in the process.

Remember, this cumulative impact is purely based upon the saving of just 5% of transformation cost (Cost of Sales). We have many case histories where companies have reduced their cost of sales by 10%, 20% and even 30%. Just imagine the impact this could have on your business over a five or six-year period!

You don’t have to make 30%, 20% or even 10% savings, as just small incremental savings can have a massive cumulative impact over a few years. A Cost of Sales decrease of just 5% per annum can more than double nett profit.

Continuous improvement is not a luxury!
It is essential to sustain company viability and jobs.